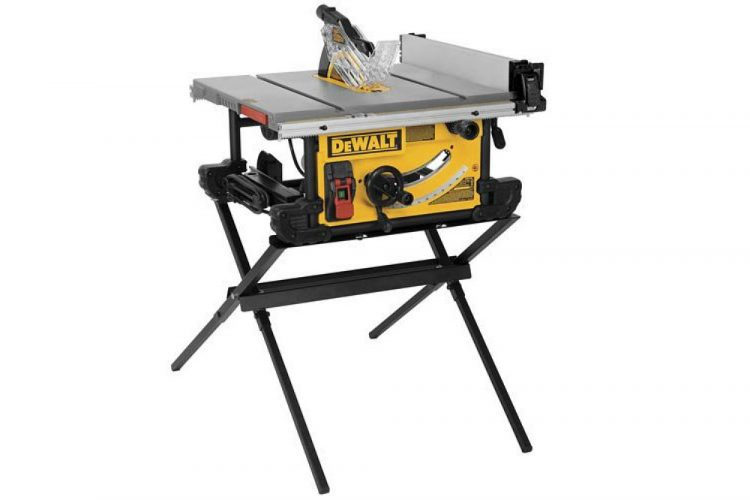 Having a hard time searching for a durable table saw? If you’re a cabinet installer looking to rip filler boards or a home hobbyist looking for your next vital tool, you’ll definitely want to stick around for this review.

Dewalt is one of North America’s most extensive repair networks, and for this review, we’re putting one of the company’s front liner, the DWE7490X 10” Job-Site Table Saw, to the ultimate consumer test.

The Dewalt DWE7490X Job-Site Table Saw promises convenience and flexibility, but can it hang with the best? Let’s find out.

The main draw of the Dewalt DWE7490X Job-Site Table Saw is obviously its cutting prowess. Our product houses a 15-amp high-torque motor enough to cut pressure-treated lumber and hardwood.

True to its form, the portable table saw is powerful enough to handle any home-cutting job. It’s also easy to adjust so you can even rip through outside corners for wall paneling with the greatest of ease. Those who own small workshops will definitely benefit from the table saw’s accuracy.

The design and precision of its rack-and-pinion fence system are enough to satisfy hobbyists and DIYers who are looking for quick and smooth cuts. The Scissor Stand that is bundled with the model is sturdy enough for daily use, although some users aren’t satisfied with its folding feature.

Another great aspect of the DWE7490X’s is portability. It is easy to store in trucks and other small spaces. This model is also easy to drag around your worksite, which is perfect for anyone with a relatively smaller garage space.

This table saw is housed in a simple packaging for an easier assembly. Taking apart our featured model for storage is also a breeze.

You can attach a vacuum to the portable table saw so you can easily clean up after a hard day’s work. Most customers appreciate that the base stand folds flat and the saw can be attached nicely without the use of bolts and nuts to secure it.

If you’re planning to leave the table saw up for weeks, you can permanently mount the saw with bolts.

Safety is one aspect all power tools should focus on, and the DWE7490X is no exception. This model has a power reset button that resets the saw once you pop a breaker, eliminating the risk of surprise when you turn the breaker back on.

You can easily remove the riving blade with just a quick lever pull so you can safely store it when you’re done. Still, a table saw is as dangerous as its user, so be sure you’re doing well yourself before working with massive power tools.

Of course, the Dewalt DWE7490X isn’t without its faults. Some users complain about how the fence lock sometimes doesn’t work.

Since the fence lock relies on the friction created by a rod pressing against the sliding rails, users have reported that the rod can’t withstand the pressure after only one month of use. The miter gauge also has no way of securing it, worrying other users about its safety.

More users also pointed out how the blade isn’t fully shrouded, allowing sawdust to scatter at the bottom of the saw. Most of these complaints were fixed by simple workarounds, but it’s worth mentioning nonetheless.

Dewalt definitely delivered on its promise of a convenient and flexible table saw. The DWE7490X is one of the best in Dewalt’s extensive lineup of power tools.

You may have problems here and there, but considering the power and precision of the DWE7490X, it will be hard to dismiss it completely.

If you don’t want a giant table saw for your small workshop, but you still want a powerful one, you should definitely give the Dewalt DWE7490X Job-Site Table Saw a try.

If you want a larger rip capacity, check out Dewalt DWE7491RS 10” Jobsite Table Saw equipped with 32 ½” rip capacity and a rolling stand. It has the same 15-amp motor underneath so you can expect the same amount of cutting power.

Meanwhile, if you want a more portable model, you can check out the Dewalt DW745 10” Compact Job-Site Table Saw. It may have a downgraded 24” rip capacity, but it has a more portable build and the same cutting prowess you can expect from a Dewalt table saw.